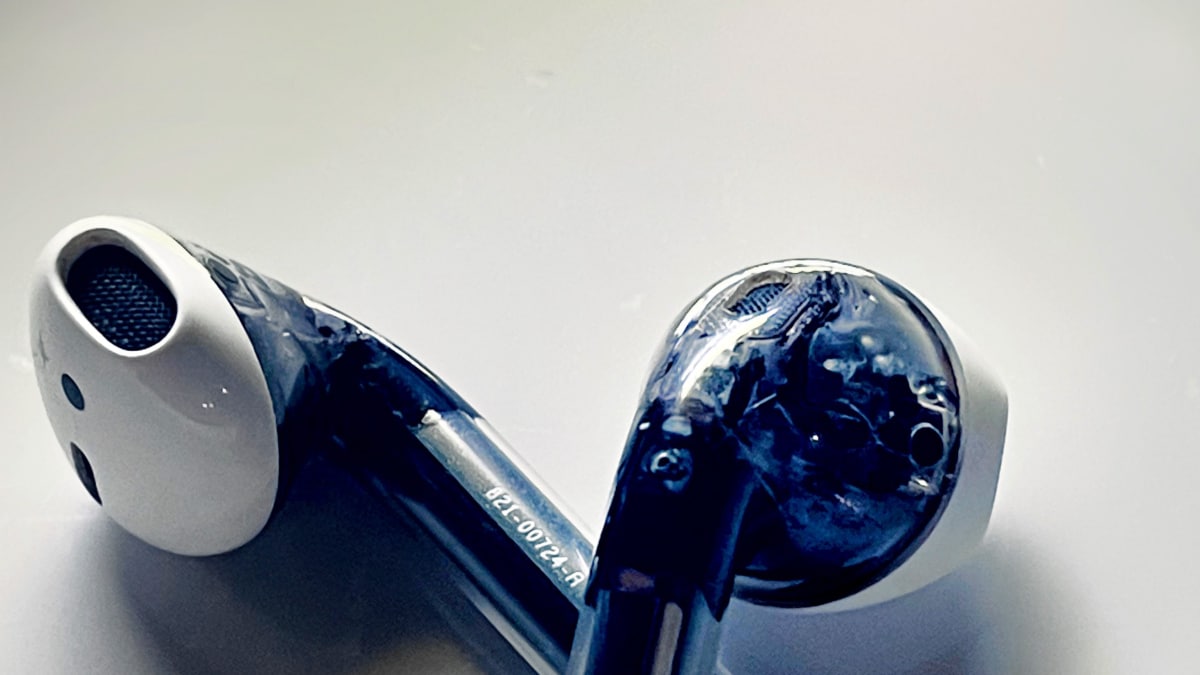 Apple AirPods and Apple 29W charger prototypes have leaked online. A popular tipster has shared photos of AirPods and Apple’s 29W USB-C Power Adapter featuring a transparent design on Twitter. In the renders, Apple’s design process is visible through the plastic shell. The translucent design in the leaked images gives a glimpse of the product’s internal mechanism as well. However, the Cupertino-based tech giant has not revealed any plans to unveil transparent AirPods or chargers.

Well-known Apple device collector Giulio Zompetti shared images of transparent prototypes of Apple AirPods and Apple 29W USB-C Power Adapter on Twitter. The images of AirPods show a transparent plastic case for the earbuds shell and the stem. The inner side of the true wireless stereo (TWS) earbuds is seen with the normal white plastic as well. It is unclear which models of the AirPods the renders represent, but these are likely to be either the first or second-generation AirPods.

Apple AirPods and AirPods Pro are currently available in a White colour option only. So the leaked images are likely to be of a prototype used for internal testing by engineers to get a closer look at the design.

Currently, Nothing Ear 1 TWS earphones, launched by the UK-based firm led by OnePlus co-founder Carl Pei, feature a transparent outer casing and charging case. The earphones were launched in India in July this year and are priced at Rs. 6,999.

The prototype of Apple’s 29W USB-C Power Adapter is also seen with a transparent casing. The 29W power adapter arrived with the 12-inch MacBook back in 2015, but Apple discontinued it in 2018 and replaced it with its 30W USB-C Power Adapter. The accessory currently retails for Rs. 4,900 in India.

Separately, Apple is reportedly working on a multi-device charger. The exact launch date of the product is not known at this moment.

Can Nothing Ear 1 — the first product from OnePlus co-founder Carl Pei’s new outfit — be an AirPods killer? We discussed this and more on Orbital, the Gadgets 360 podcast. Orbital is available on Apple Podcasts, Google Podcasts, Spotify, Amazon Music and wherever you get your podcasts.
Advertisement

Nithya P Nair is a journalist with more than five years of experience in digital journalism. She specialises in business and technology beats. A foodie at heart, Nithya loves exploring new places (read cuisines) and sneaking in Malayalam movie dialogues to spice up conversations. More

This article originally appeared on https://gadgets.ndtv.com/audio/news/apple-airpods-29w-usb-c-power-adapter-prototype-transparent-design-leak-2631691