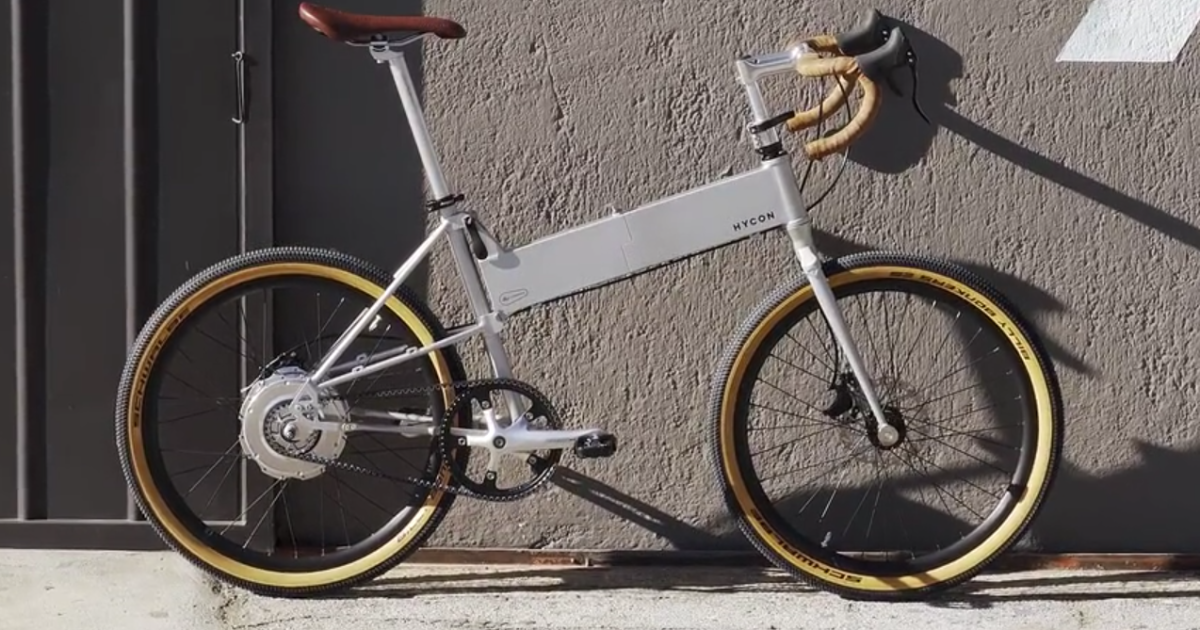 With its drop bars, brown leather, carefully selected brand-name components and bar-meets-rear-triangle folding frame, the new Hycon Gravel e bike looks like a mash-up of several bikes from different corners of the industry. But somehow it all comes together, hitting city streets and dirt paths as a stylish electrified rig that charges itself during braking and folds down in a matter of seconds to travel effortlessly around indoor spaces and outdoor no-ride zones.

The magic of the Hycon design lies in its folding mechanism. After folding down the pedals and unclipping a few quick-release levers, a single rolling motion collapses the frame into transport mode. The rider then folds the handlebars down and to the side and is ready to board a train or roll the bike into the office, all in just a few seconds. The two wheels sit parallel to each other when folded, making for smooth, easy rolling. When it’s time to get back in the saddle, the bike sets up just as quickly as it folded down. 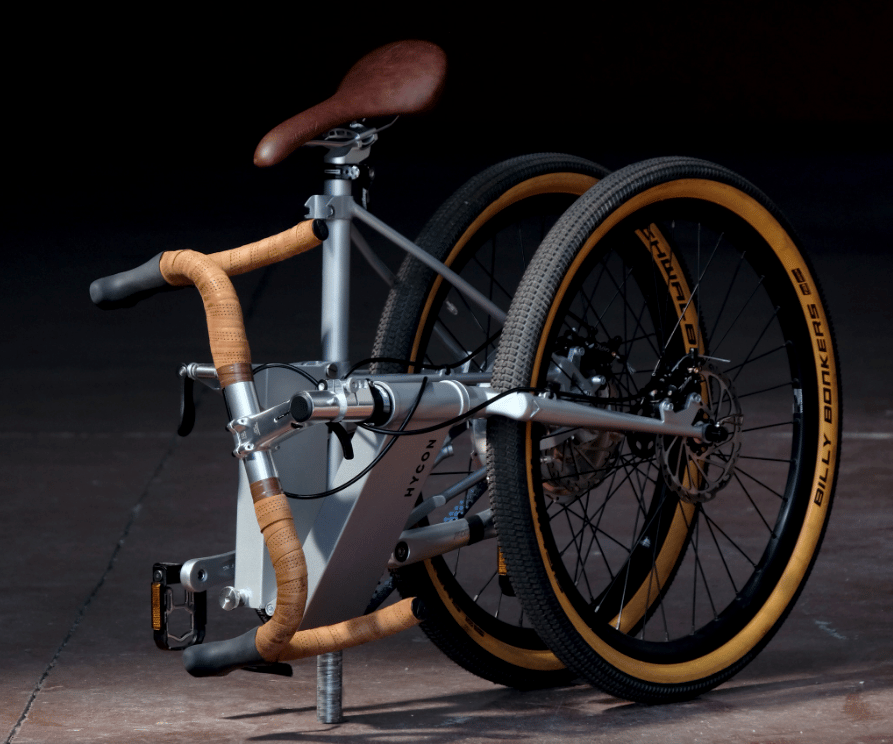 In just a few seconds, the Hycon Gravel folds up and rolls along with ease

For electrification, Hycon, a self-described “Italian adventure lifestyle brand,” relies on a 250-W Zehus Bike all-in-one rear hub drive. It skips over the top-tier Zehus Bike+ drive, which can operate entirely on regenerated energy without plugging in, to keep pricing down, but the “Bike” drive still offers KERS regeneration, for assisted ranges between 21.7 miles (35 km) in “Turbo” mode and 37 miles (60 km) in “Eco” mode. The rider can either pedal backwards or hit the regen button on the available handlebar-mounted remote control and the KERS system will apply motor braking to charge the battery.

The all-in-one construction of the 6.6-lb (3-kg) Bike hub drive eliminates the need for bulky battery packs and wiring and includes integrated Bluetooth for connecting to the smartphone app and remote control. Users can charge the 173-Wh lithium-ion battery in two to three hours. 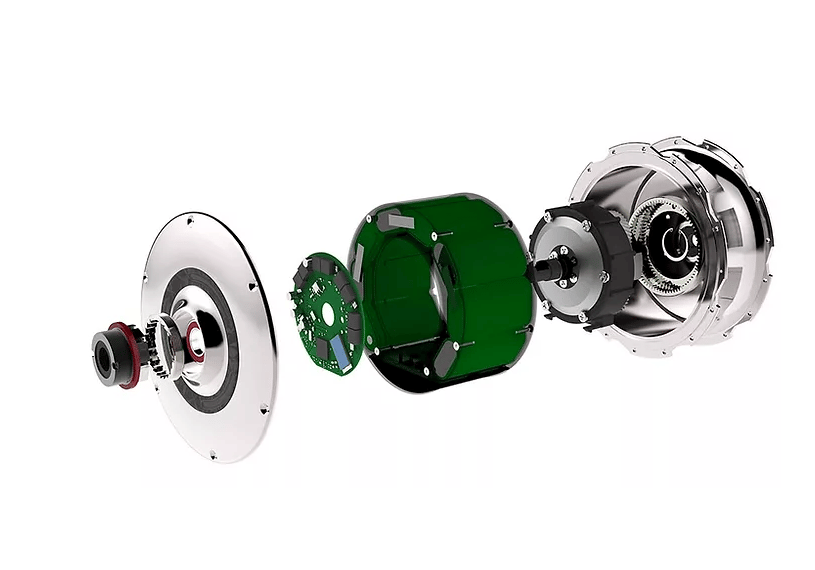 The Zehus Bike drive packs the motor, Bluetooth hardware and battery into a single hub unit

As far as the Gravel e frame and cycling components, Hycon strives to hit just the right balance of compact, convenient folding and comfortable cycling. The 24-in wheels are a few inches shy of standard gravel or road wheels, but they’re larger than the wheels you’ll find on many folding bikes. Both the saddle and handlebar adjust generously in height to provide a custom fit for each rider. A Gates CDX belt drive delivers smooth, clean pedaling.

The electric bike weighs in at 35.2 lb (16 kg), and Hycon also offers a 28.7-lb (13-kg) non-electric Gravel c chain-drive bike for those who don’t need the e-assist. Hycon intends to manufacture the chromoly frames in Italy, and its combination of black or silver frame and leather saddle and grips adds some classic style. 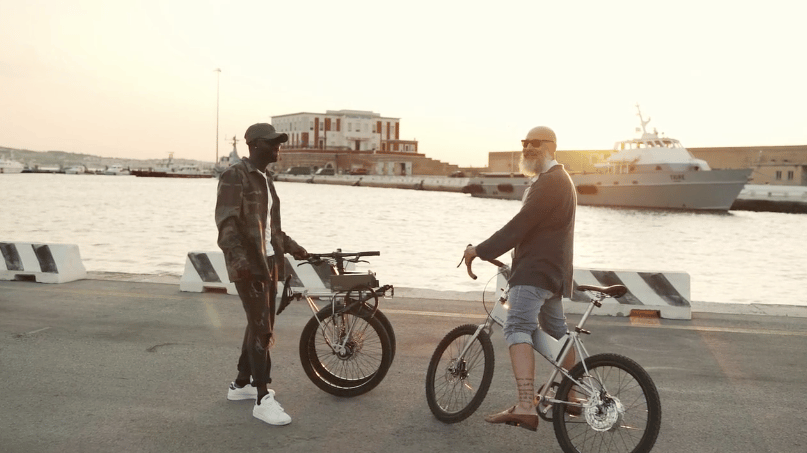 Ready to transport, ready to ride

Hycon is running a Kickstarter campaign now in an effort to get its bikes to market. The Gravel e starts at the €3,540 (approx. US$3,830) pledge level, the non-electric Gravel C at $2,020 ($2,185). Hycon is also offering city variants with the same frame and available Zehus drive plus a straight MTB-style handlebar.

This article originally appeared on https://newatlas.com/bicycles/kers-charged-hycon-gravel-ebike/