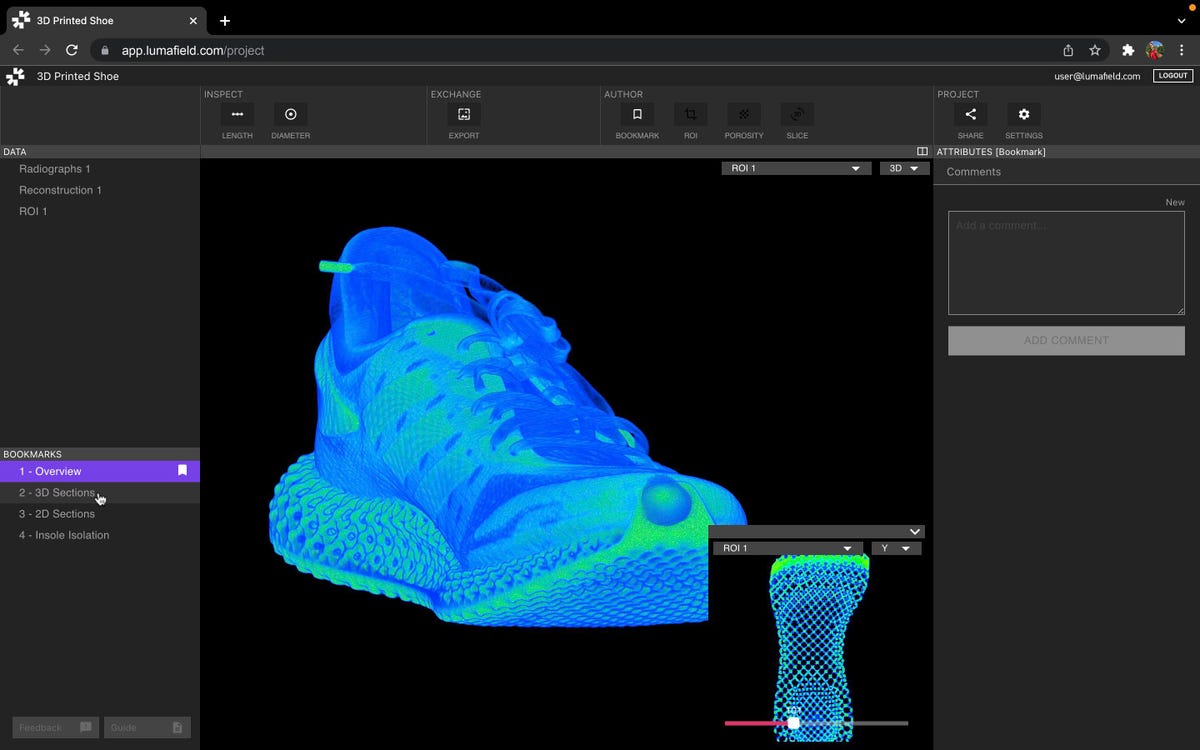 Lumafield emerges from stealth with $32.5 million in funding and early customers that include L’Oreal, OXO and Trek Bicycle.

What if industrial designers could see inside a bicycle or a running shoe with the same precision that doctors can image their patients’ internal organs? That’s the basic idea behind Cambridge, Mass.-based Lumafield, which designed a new type of CT scanner that gives engineers the ability to peer inside their products to identify leaky seals or create longer-lasting designs.

Lumafield isn’t the first company to design computed tomography scanners that could be used by engineers and product designers. But traditional industrial scanners from companies like Zeiss and Nikon were complex and expensive instruments, costing upwards of $1 million, making them best for high-end use cases like aerospace. Lumafield’s Neptune scanner, by contrast, is available for less than $3,000 a month. That allows the scanning technology to be available to consumer products companies, which previously relied on cutting items open with a band saw and putting pieces under the microscope to look for quality issues.

“A Formula One car is amazing, but if I am going to the grocery store I don’t need a Formula One car,” says Eduardo Torrealba, Lumafield’s cofounder and chief executive officer. “We are trying to take technology developed for the most extreme applications in the world and make it accessible for every engineer.”

Lumafield’s machines use a series of X-ray images to create a detailed, multi-colored 3D reconstruction of a scanned object’s features, both externally and internally. The resulting digital models allow designers and engineers to visualize and measure aspects of their products—foam density, say, or minor misalignment problems—that had previously been invisible.

For the past two and a-half years, Torrealba and his team have been operating in stealth to develop the new technology. Today, Lumafield is emerging from stealth with $32.5 million in funding at a valuation of several hundred million dollars (Torrealba declines to be more specific) and early customers that include L’Oreal, OXO, Saucony and Trek Bicycle.

Lumafield cofounder and CEO Eduardo Torrealba: “This is the hardest thing I think I can work on and make an impact on.”

Torrealba, a 34-year-old Hispanic American, grew up in a working-class family in Arlington, Texas, where his father ran an air-conditioning repair business. He went to Baylor University in Waco on a full scholarship from the Gates Foundation’s Millennium Scholars Program.

“College changed my life,” Torrealba says. “It gave me a chance to see and experience things I wouldn’ve have otherwise.”

He saw how some of his professors had commercialized technology based on their research, and he went to University of Illinois Urbana-Champaign with the intention of following that path to become a professor. “I started doing research and I instantaneously realized I hated it. I was not cut out for a Ph.D. program,” he says. “I really just wanted to build products that solved problems for people. I went to a startup event and I learned that you didn’t have to have a Ph.D. to start a company, you can just start a company.”

With a few friends, he targeted a problem that plagues a lot of students: They were killing their houseplants. Their company, Oso Technologies, raised nearly $100,000 on Kickstarter in 2014 to bring its Plant Link moisture sensor to life. But, like many startups, Oso struggled. “It was the wrong time, wrong team and wrong tech,” Torrealba says. In 2016, Scotts Miracle-Gro acquired Oso for an undisclosed amount. “I didn’t make any money off that, but the lessons learned were extremely valuable,” he says.

Meanwhile, in 2014, he’d moved to Boston to become director of engineering at 3D printing firm Formlabs after meeting that company’s cofounder and CEO Maxim Lobovsky through a mutual friend. “It was a rocket ship for four years. I learned what it takes to build products successfully,” he says.

“We are trying to take technology developed for the most extreme applications in the world and make it accessible for every engineer.”

By 2019, he was ready with his own idea for 3D scanning technology. Put an object inside its scanner, basically a large box that weighs 3,000 pounds and stands six-feet high, and X-rays capture hundreds or even thousands of images in multiple dimensions as the item rotates. With Lumafield’s software, engineers can then peer into the reconstructed 3D model, where colors correspond to material densities and the images include detailed information about porosity and voids.

“This is the hardest thing I think I can work on and make an impact on,” Torrealba says. “If you are not going to make an impact as an entrepreneur, you might as well join a large company.”

Its first customers were other companies in the Boston startup ecosystem, including 3D printing firm Desktop Metal and wearables startup Whoop. The company also started by doing scans for clients rather than selling the scanners themselves. Torrealba says it was important to stay under the radar despite raising funds from investors that include DCVC, Kleiner Perkins and Lux Capital so as not to be distracted while building the technology and signing up dozens of customers.

The beauty of a 3D-printed turbine.

“We said, ‘We’re going to build this as inexpensively as we can, and sell to as many engineers as we can and change the way that people think about this technology,’” Torrealba says. “That’s a big risky bet. It’s also incredibly hard.”

To get the cost down, Lumafield reengineered how its CT scanners are built, taking cost out of the hardware and moving to the cloud. Its scanners don’t operate at quite as high of a performance level as the more expensive ones; for example, they show a resolution down to 25 microns rather than 9 microns, enough for most products even if not good enough for an aircraft’s turbine engine.

Today, its consumer-products customers use its scans for inspection and quality control as well as product development. Cosmetics giant L’Oreal, for example, discovered that a bottle and cap was leaking despite having passed traditional inspection measures. By scanning it discovered a minuscule 100-micron indentation inside the bottle’s neck. (A human hair is approximately 70 microns.) In another instance, after switching suppliers on one of its caps, it found tiny air pockets that could have caused them to fail. “A very small defect in an injection molding process is the difference between shipping millions of units and scapping millions of units,” Torrealba says.

Trek Bicycle uses the scanner to help understand what happens to its bikes’ frames after a crash or a rock strike in order to design a longer-lasting product. Saucony, meanwhile, can peer inside its Endorphin Pro running shoes to see the details of the beaded foam in the sole. Is the bead distribution exacting? Has there been any drift in the shoe assembly? Are there any little gaps or voids?

“It’s helped us reduce sample cost because we don’t have to physically cut shoes open,” says Luca Ciccone, Saucony’s director of product engineering. “This is what I’ve wanted for 20 years. “ After all, while running shoes are technically complex, they sell for a few hundred bucks, putting the expensive industrial scanners out of reach.

“This is a space dominated by a small number of companies that are building for the top few percent of customers. Their technology is in the hands of Boeing or Rolls Royce or Stryker, but it is not in the hands of Trek Bicycle or L’Oreal and that’s because it is way too expensive,” Torrealba says.

This article originally appeared on https://www.forbes.com/sites/amyfeldman/2022/04/13/meet-the-startup-that-designed-ct-scanners-to-make-consumer-products-better/