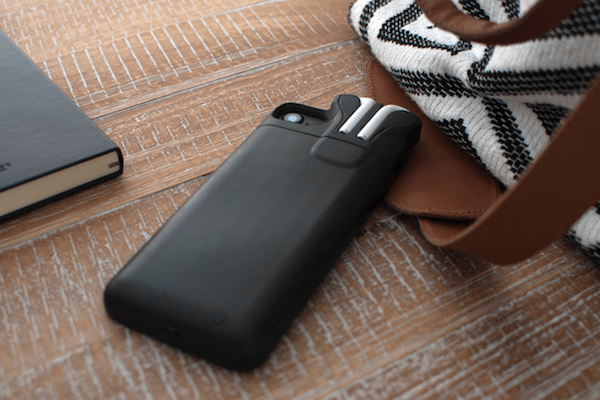 The AirPods battery lasts a fair amount of time, and the included charging case means you can keep going with just a quick charge, too.

But some folks might not want to bring the charging case with them everywhere they go. For those people, and those who like having a battery case on their phone, Nova Technology has launched a Kickstarter project that sees an iPhone battery case integrating with a way to charge Apple’s truly wireless headphones, too. It’s called the PodCase.

It is described as a “slim case” for carrying and charging your iPhone and AirPods, all in one package. The case itself includes a 2500mAh battery, and Nova Technology says that’s worth up to a single full charge of your iPhone and an additional 40 charges for the AirPods. It also includes a USB Type-C charging port, so right in line with the charging methods for the newest MacBook and MacBook Pro models.

“Keeping track of your AirPod charging case is a chore. It’s one more gadget to misplace, one more item to remember when you run out the door, and one more lump of plastic in your pocket. Drop it into your bag or purse and you might as well call search and rescue!

Storing your AirPods with your phone seemed only natural to us.”

It will fit the iPhone 7 and iPhone 7 Plus to start, and the company says that it is working on a PodCase for the iPhone 8, too. It will be priced at $99 if/when it launches, or early bird backers for the project can nab it for just $79.

Nova Technology is headed by Eric Migicovsky, who is the founder of Pebble and is certainly no stranger to Kickstarter. The current PodCase project is looking for a total of $300,000 when it’s all said and done in 29 days. At the time of publication there were 57 backers who have pledged a total of $4,680.

What do you think of the idea? You going to back it?

This article originally appeared on https://www.iphonehacks.com/2017/09/nova-airpods-podcase-kickstarter.html