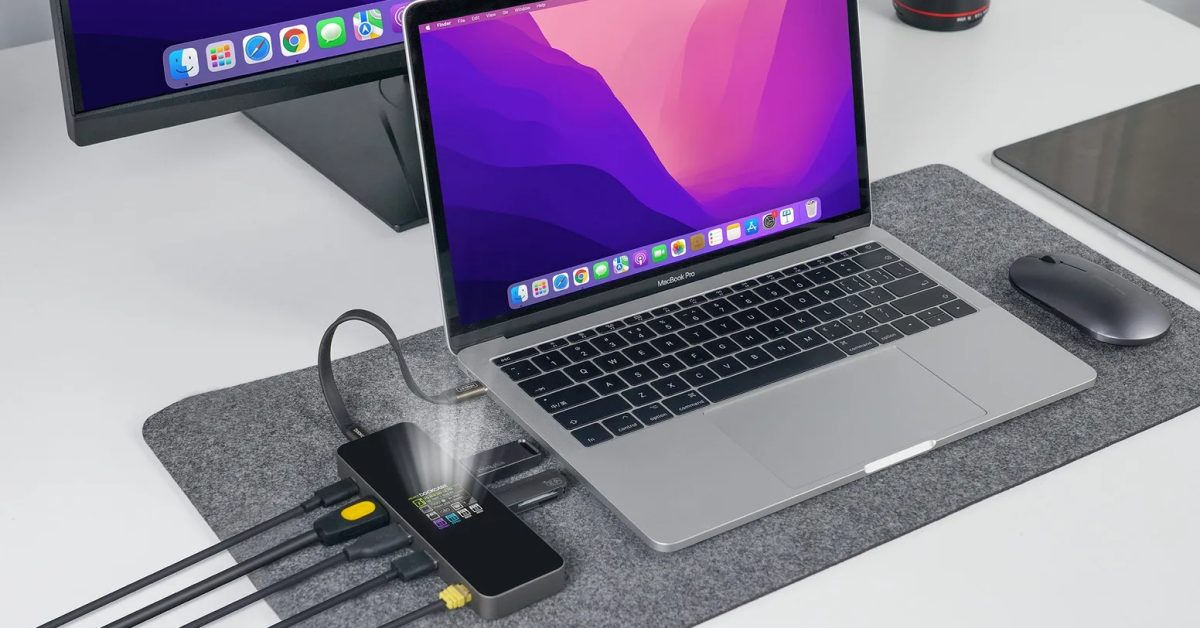 DockCase, best known for its combination MacBook hubs and cases, recently launched its latest USB-C smart hub on Kickstarter. The project has already surpassed its goal more than six times over, but you have until November 26 to support the project and get the smart hub for its early-bird price.

Before I get into my review, it’s important to note this is a Kickstarter project, so it is not quite like ordering a finished product at Amazon. The unit I have for review is still a beta version, and ultimately, delivery is not guaranteed. The estimated delivery is January 2022, but as with any crowdfunding project, could be delayed. With that said, DockCase has an established history of manufacturing similar products, and the project is already funded (6 times over!). This is definitely one of the safer Kickstarters to back.

The smart hub connects to your computer over USB-C and features four USB-A ports, a high-speed USB-C port for data, a USB-C port for up to 100 watts of power delivery, an HDMI 2.0 port, and a gigabit ethernet port. Of the four USB-A ports, two of them are USB-2.0. So these two ports are limited to a maximum speed of 480Mbps. The other two USB-A ports, as well as the USB-C port, offer up to 10Gbps. Those two slower-speed USB-2.0 ports are perfect for accessories like a mouse and keyboard, while USB drives should be plugged into the high-speed ports.

If all you are looking for in a hub is to add additional ports, frankly, there are already myriad other options available at Amazon, at a lower price. However, the DockCase smart hub brings something rather unique to the table: a screen. The small 1.54-inch screen displays the mode in which all the ports are operating and with a button that allows you to change settings. That customizability is where the DockCase smart hub stands out. The customizability comes through the various “Modes.” As the hub connects over a single USB-C port and is not Thunderbolt-compatible, it will be limited to USB speeds. With the modes, you can choose how you want the capabilities to be prioritized. Personally, I stayed in “My Mode” and increased the power available to the Dock.

There are power delivery modes to optimize for use with the Nintendo Switch, in addition to being able to select between PD version 2.0 and 3.0. A (confusingly named) “Extreme” video mode allows the hub to interpolate 4k30 video output from a device and send it as a 4k60 signal over the HDMI port. The hub also supports standard 4k60 output.

My experience with the DockCase USB-C smart hub

Since I received the hub, it has replaced two other smaller USB hubs on my desk. My desk setup currently consists of my MacBook living on a stand and two additional monitors, with a third-party wired mouse and keyboard. I have gigabit ethernet plugged into the dock, and normally have a combination CF/SD card reader and a USB to SATA adapter plugged in. I also regularly plug in external SSDs like Kinston’s XS2000 and the DataTraveler Max I reviewed recently.

The smart hub has met my connectivity needs almost perfectly. Integrated CF and SD card slots would be nice, but most people won’t need those on a regular basis (and DockCase’s previous 7-in-1 hub includes an SD card slot in place of the USB-C port). That USB-C port is particularly nice in my case, as while I love the DataTraveler Max, one of my only complaints about it was the width. It won’t fit next to another device when plugged into my MacBook. The DockCase hub has plenty of room around all of the ports for me to plug it in without worrying about interference. The only port on the hub I haven’t been using on a regular basis is the HDMI port, as my current monitors only offer Thunderbolt and DisplayPort connectivity.

I was skeptical I would find much use from the display and smart functions, but there have been two instances so far where I was relieved to have them.

When I first started using the hub, I accidentally plugged a capture card into one of the USB-2.0 ports. There were some major issues with the video, but I noticed it was a USB-2.0 port lit up on the screen, so I quickly moved it over to one of the faster ports.

I also realized one of my many ethernet cables must have a broken wire inside, so it only runs at 100Mbps speeds, rather than Gigabit or faster. Sure, I could have pulled out a cable tester, or I could have looked in the computer settings to find that out, and once I started a file transfer I would have immediately realized, but that was a quick indication that the cable needed to be put in the garbage.

My issues with the DockCase smart hub

My experience hasn’t been totally flawless, though. With customization can come some tradeoffs in ease of use, and this came while getting ready for a live stream over on the Space Explored YouTube channel. I was using the DockCase smart hub to connect all the devices to my laptop, including a capture card, an iPhone, and a few more. The hub was plugged into AC-power and charging my MacBook, but was seemingly unable to power all the external devices. This caused the hub to shut off intermittently.

My capture card also seemed to freeze from time to time. Thankfully, both of these seem to be fixed by increasing the dock power setting to 25W. It’s an easy solution, and one I’m glad the smart hub is capable of, but it was certainly frustrating at the moment. Should you buy the DockCase high-speed USB-C smart hub?

Overall, my experience has been very positive. I have used a fair few different hubs and adapters with my MacBook, and all they ever were to me was a tool to overcome Apple’s anti-consumer decision to cut down on ports, which Apple has thankfully walked back. It’s hard to describe, but the smart hub seems like something more, almost a gadget of its own, something that actually earns its place on your desk.

Will most people need the DockCase smart hub? No, other devices will probably suffice to meet basic expansion needs. Yet, it’s hard not to recommend this. Its slick look and screen will catch people’s attention unlike any other hub or adapter. There are also times, like I experienced, where having it can save a few minutes of troubleshooting. And the ability to eventually update the firmware on it is pretty neat!

The DockCase 8-in-1 high-speed USB-C hub can be purchased through Kickstarter at an early bird price of $89. As an extra part of the Kickstarter, DockCase is offering its previous 7-in-1 smart hub for 40% off, at $49

This article originally appeared on https://excellentpix.com/review-dockcases-new-high-speed-usb-c-smart-hub-for-macbook-now-on-kickstarter.html