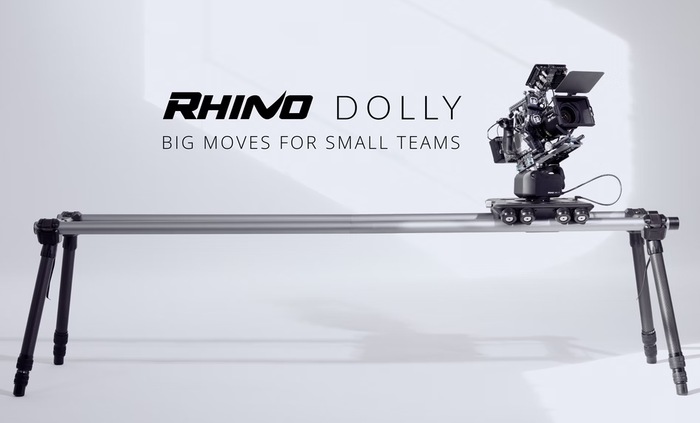 Photographers searching for a professional motorized camera dolly to move larger cameras, may be interested in the aptly named Rhino Dolly. Specifically designed for small teams and to capture “mind blowing motorized dolly shots” the new photographic equipment has launched via Kickstarter this month with the aim of raising $200,000 to make the jump from concept into production. Backer early bird pledges are now available for the unique project from roughly $1800 or £1373 (depending on current exchange rates).

“Dollys are indespensable on a set. The problem is that setting them up with a small team and lugging them around makes you ask the question, “Do we really need that shot?” Our goal is that you never ask that question again with Rhino Dolly. Unleash your creativity with Rhino Dolly and capture shots that are impossible to get with other tools. With our newly released firmware for Arc II you can create amazing compositions with up to 5 points or keyframes to focus on thoughout your shot.”

“When we started our design process last year, we all agreed that everything had to fit in a single case. We hate carrying gear to shoots and knew this feature would be the heart of the system. Let’s just say that finding a way to fit a big carriage, end plates, rails, support legs and our Arc II motion control system in a case was not an easy task.

It drove all of our design decisions and we’re super happy with the streamlined workflow the system provides. Note: If you want to bring your own stands you can use the free space in the lid of the case to store two extra rail segments. The case has a foam cut out for the Rail Support accessory so you can effectively carry a 10.5ft Dolly if you’re not using the Carbon Quick Legs.”

“Most dolly users capture shots manually by pushing the carriage from side to side. Motion control allows you to capture smoother shots on the first take, saving you precious time. It also frees up a person on set to engage your talent or run other parts of your production, literally saving you money on every shoot. Rhino Arc II makes it easy to motorize your shot.

Simply attach the belt, mount it to Rhino Dolly, and Arc II powers the motor built into the Rhino Dolly Carriage for perfectly smooth shots with very little setup time. You’ll never go back to a hand pushed shot again after you see how easy it is.”

For a complete list of all available pledges, stretch goals, extra media and detailed specs for the motorized camera dolly, jump over to the official Rhino Dolly crowd funding campaign page by visiting the link below.

This article originally appeared on https://www.geeky-gadgets.com/rhino-dolly-motorized-camera-dolly-01-04-2022/