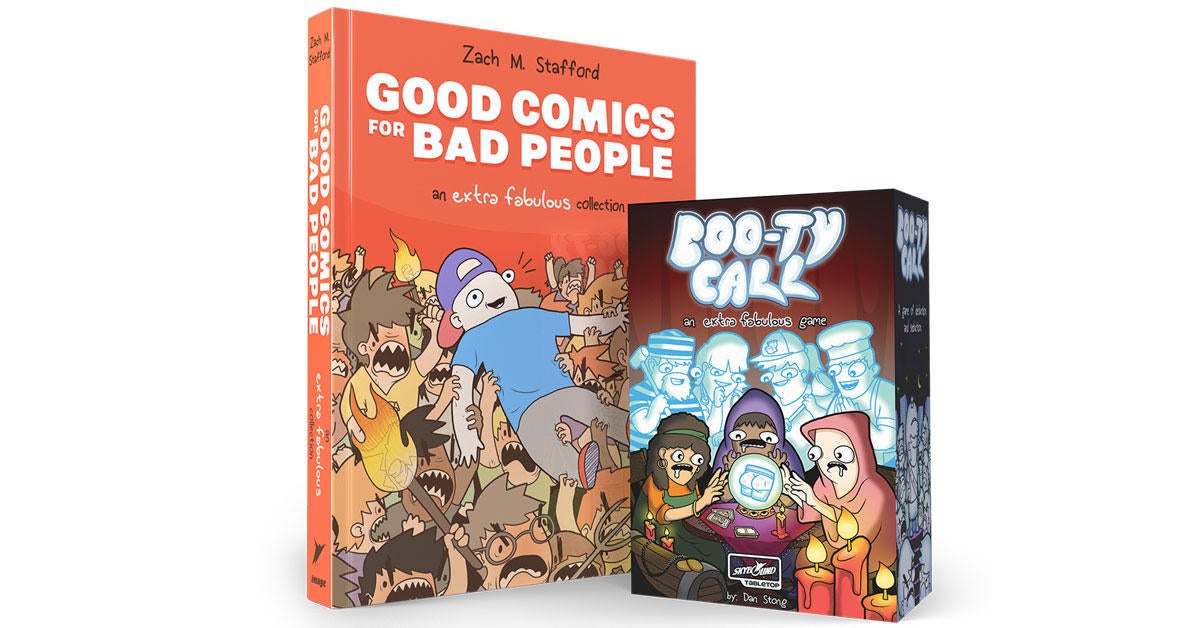 Extra Fabulous fans have a lot to celebrate today, as Skybound has announced Good Comics for Bad People: An Extra Fabulous Collection, the first-ever graphic novel collection of Zach M. Stafford’s hit webcomic Extra Fabulous. That’s not all though, as Skybound has also revealed a brand new tabletop party card game titled Boo-ty Call, and both are part of the brand new Kickstarter campaign that is live right now. Both are for mature audiences and you can get a glimpse at them in the new trailer above. You can also check out the entire campaign, including all the stretch goals, on the Kickstarter page right here.

“I have been waiting for this Kickstarter my entire life because if the campaign is a success, I plan to get hair implants and live the rest of my days on a small boat in the ocean,” Stafford said. “If the campaign is not enough of a success, I will remain bald and continue to make bad comics. It is your choice.”

The campaign will also feature Boo-ty Call, a card game that is described as if Guess Who and Red Flags had a spooky baby. 36 humor-filled Ghost Profiles and 50 spicy seance cards will aid you in finding your true love from behind the veil, and you can find the full description below.

“Then, step into the world of Boo-ty Call, a party card game where lonely mediums interpret cryptic answers from a sexy ghost in a race to score! Imagine if Guess Who and Red Flags had a spooky baby. That would be this game! With 36 hilariously illustrated Ghost Profiles to sweep you off your feet, 50 spicy séance cards to help you find your true love from beyond the veil, and 1 small but feisty rulebook to boss you around (in a good way), there’s no telling what will happen when you play – except, well, bad things…but like, in the best way.”

“We’ve launched incredible Kickstarter campaigns for webcomic collections like Mr Lovenstein Presents Failure and tabletop games like Trial By Trolley, but we’ve never tried mixing chocolate and peanut butter until now – and we couldn’t have found a more perfect partner than Zach M. Stafford’s Extra Fabulous,” said Alex Antone, Senior Editor, Skybound Entertainment. “We knew Good Comics for Bad People would be great because we have been fans of the webcomic for years, but Boo-ty Call has taken on a life – nay, afterlife – of its own and we could not be prouder! Zach and the team here at Skybound
have put together an experience you have to see to believe…but maybe don’t tell your parents.”

You can check out the full kickstarter campaign right here.

This article originally appeared on https://comicbook.com/gaming/news/skybound-extra-fabulous-graphic-novel-boo-ty-call-game-kickstarter/

Honest Review Of The All New 16

The End of the Industrial Age