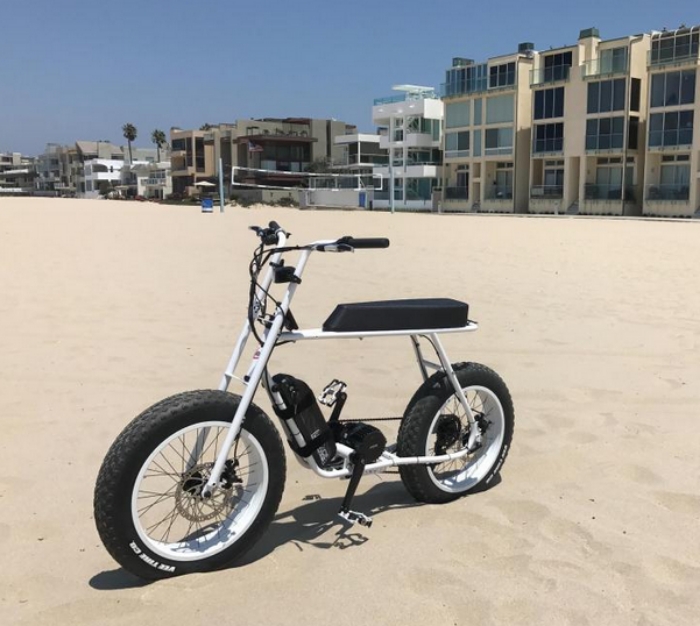 When I was young, one of my favorite memories was riding a minibike. For readers who may not know where that term comes from, back in the 1950’s and 60’s, there was a cheap family of scooters that used a Briggs & Stratton lawnmower engine along with a simple centrifugal clutch. You didn’t have to operate any type of clutch lever. At idle the engine was not engaged, but as soon as you twist the throttle, the auto-clutch would grab-and-go.

Here’s an ad from an old magazine. The “Indian” in the name refers to Indian motorcycles

When I first saw a pedal-bicycle with a mini-bike frame, I thought it was cute, and that the builder was trying to generate some nostalgia in potential customers. I honestly didn’t think they would become as popular as they are now. However, after some thought, I think their popularity signals a real tipping point for electric bicycles.

The first few years that electric bicycles began growing as a transportation option in Europe, they were fairly low-powered. Many countries in the EU limited their power to 250W by law. When these ebikes began to be imported to the US, they did not sell well at all! The main styling theme seemed to be that they were very stealthy, you almost couldn’t tell they were electric. They “looked like” a regular bicycle.

He may not be smiling, but this kid is having a blast!

Whether that was a good idea or a bad idea, the American power limit for a street-legal ebike is 750W, and when the Bafang BBS02 kit came out at 750W (actually capable of 1100W), it seemed like ebikes finally began to really take off in the USA.

Even so, there was (and still is) a large percentage of the population that want their ebike to look like a bicycle, with an almost invisible motor, and to remain as light as possible. For an example of a stealthy ebike, click here.

Although these frames are the same shape as the vintage mini-bikes, the new crop are full-sized for adults.

With this new wave of mini-bike frames, they have never really looked like a bicycle from the beginning. In fact, they are designed to look exactly like a motorized vehicle from many peoples’ childhoods. Lets have a look at some of the modern electric mini-bikes.

[All of the ebikes listed below have dual disc brakes, so I won’t need to mention that in their features’ list]

Back in 2015, we went to the Interbike convention and one of the new developments was that 20-inch wheels, tires, and tubes were finally available in a 4-inch wide format. Coast Cycles was an early adopter, and I think there’s a chance they might have been the first to produce a mini-bike style of frame. Either way, the Buzzraw is their latest version.

Coast Cycles Buzzraw. The pic is the BBSHD version.

The Buzzraw SL is a chromoly-steel “frame only” bike (you would need to buy the rest of the parts). The “Buzzraw” is a pedal-only bicycle. The Buzzraw X750 is a full-suspension frame with a 750W geared rear hub from Bafang. They have just started to advertise a version with the Bafang BBSHD mid drive.

There are two reasons to put the Luna Cycles Banana at the top of your consideration list. Luna has made no secret of the fact that they source the “Ruckus” frames from Coast Cycles. The first reason to make sure you look into them is that they not only start out with the well-regarded Bafang BBSHD mid-drive motor, but they are the only retailer that has the option of upgrading to a 2500W controller (the Ludicrous version), which is a huge step-up from the stock BBSHD 1500W.

By having a mid-drive motor (which allows the motor to drive a selection of gears, unlike a one-speed hubmotor) and the option of 2500W, The Luna Banana will provide the best possible climbing ability, if you live near steep uphills.

The second reason you should seriously consider the Banana as a top choice is that the Banana also has the option of the greatest battery pack ever built for an ebike. The Luna Cycles Wolf pack. This may sound like hype, and some type of ad, but…every cell is individually fused for the ultimate on fire protection.

Plus, the entire pack is fully potted in clear epoxy (or black). Doing that provides the ultimate in vibration and crash protection, and also the ultimate in water-proofing. Not only that, but it has the option of a 50A BMS for high-performance, when using my favorite ebike cell, the Samsung 30Q.

For the latest options, price, and features of the Luna Banana, click here.

We’ve been friends and fans of Tora Harris at Juiced Riders for a long time. He is one of our trusted vendors.

The Juiced step-through version is called the “Scorpion”. It also has a full-suspension option.

Ruff is based in Germany, and they have decided to retail a mini-bike style of frame with the proprietary Bosch mid-drive. Europeans seem to like the high-end and smooth torque-sensing mid drives, but they are limited to 25 km/h, which is 16-MPH. And the power levels that are available seem to be limited to 250W-500W, depending on the country of purchase.

The Super-73 started out as a Kickstarter, and they use the well-regarded Bafang BBSHD.

The standout feature of the Ariel D-class is that not only is it an ebike, it is a 2-WHEEL DRIVE ebike! If you only have mild hills, and you live near the beach…a 2WD ebike is an extreme upgrade when riding through sand or off-road.

I also suspect that the D-Class would be quite a useful mule to have around a ranch where it snows in the winter. For that kind of user, I’d swap-in the largest 52V battery pack I could find, and click here for several selections that would work.

Part of my enthusiasm for large 48V and 52V battery packs is that they can run an inverter to provide 120V AC in an emergency, or at a remote location.

The two hub-motors on the D-Class are geared. That means that they provide lots of torque per input watts, compared to the direct-drive motors that are the same size. That being said, geared motors have a poor heat-shedding path, so they are not good for climbing steep uphills.

However, for snow or sand, 2WD with fat-tires cannot be beat. For more info on the Ariel D-Class, click here.

The UNI Moke is based in Germany, which shows how far obscure bits of American culture can travel and take root. It uses a single geared hubmotor in the rear.

For more info on the UNI Moke, click here.

If you don’t want to fiddle with spokes, the Addmotor and the Juiced both use cast wheels.

Pineapple started out on Indiegogo back in 2017, but I can’t find any recent information about them. Its a single-speed with no headlight or tail-light, so it’s as bare-bones as they come.

Even though the Pineapple is only a single-speed, the flat terrain of a beach community is exactly where these min-bikes would perform well.

Out of all of these selections, this model has the most powerful hubmotor, and the most powerful front brake. It uses 17-inch “moped” rims, which is equivalent to 24-inch bicycle rims (but much stronger). That being said, it does have pedals, which drive a single-speed chain.

Some riders either need (or simply want) a step-through frame. Once you take away the top-bar, the ebike starts to look a lot less like a minibike, but…I felt I should include at least one step-through. One of the handy characteristics of the mini-bikes is the long padded seat so two riders can squeeze-in, and the Rad Runner has that.

Ebikes with 20-inch wheels and fat tires are proving to be very versatile and useful. Even if you don’t particularly care about the nostalgia of a new frame with a vintage style, all of these selections are real “knock around” ebikes that can take some abuse and still keep going.

This model is surprisingly only $1500, and it inludes front and rear suspension. 48V and 750W…

This article originally appeared on https://www.electricbike.com/the-electric-mini-bike-craze/