The Legend of Vox Machina prepares to start second hilarious

What date and time will season 2 of Critical Role’s popular The Legend of Vox Machina animated series release worldwide on Prime Video?

Is the curse of the video/tabletop game–television adaptation officially broken?

Well, whilst the likes of Halo and Resident Evil flopped, the likes of Castlevania, Arcane, DOTA: Dragon’s Blood, and now The Last of Us are taking game-TV adaptations to a new level.

Arguably one of the most successful adaptations of 2022 was the utterly-fantastic Dungeons & Dragons-inspired animated series, The Legend of Vox Machina from Critical Role and Amazon Studios.

So, what date and time will The Legend of Vox Machina season 2 release on Prime Video around the world?

The Legend of Vox Machina season 2 is scheduled to premiere around the world via the Prime Video streaming platform on Friday, January 20.

The series will utilize a split-broadcast release, the same as season 1, with multiple episodes dropping in regular batches each week.

This means that episodes 1, 2, and 3 are expected to release for OTT streaming at the following international times on January 20:

Speaking to Variety, Ashley Johnson (voice of Pike Trickfoot) teased that season 2 will “get more into the nitty-gritty of the characters… Now we can get into their interpersonal relationships, their backstories.”

“This season almost feels in some ways closer to the game. I feel like it’s sillier and it’s darker — and it’s bigger and badder. I feel like everything is just turned to 11.” – Ashley Johnson, via Variety.

Liam O’Brien (voice of Vax’ildan) would add that “We see this new family tested in the face of insurmountable odds… and what they do to hold each other up.”

A Kickstarter campaign initially helped fund the first 10 episodes of the Dungeons & Dragons show; however, Amazon Prime Video obviously saw the potential from the outset, ordering an additional 14 episodes – taking the total to 24 episodes across two seasons.

“Critical Role blazed a new trail for original digital content, with fresh new voices and humor that earned devoted fans around the world, as evidenced by their wildly successful Kickstarter campaign. We’re thrilled to work with the whole team to bring ‘The Legend of Vox Machina,’ and new Critical Role series, to our Prime Video customers.” – Jennifer Salke, head of Amazon Studios, via Variety. 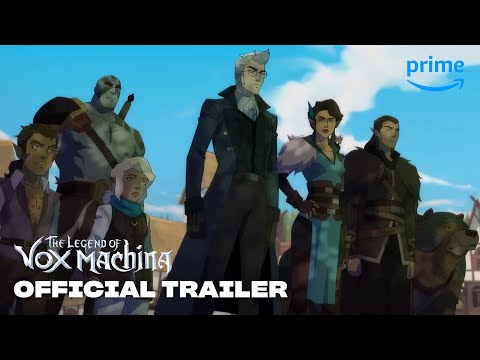 Critical Role frontrunners Sam Riegel and Travis Willingham would then elaborate on working with such a massive streaming partner.

“We were absolutely floored by the level of enthusiasm we received on the Kickstarter campaign, and now we can deliver exactly what the fans wanted, and more. Teaming with Prime Video to deliver the series to fans across the globe is exciting and surreal — and we’re psyched to be able to tell even more stories with not just one, but two 12-episode seasons!” – Sam Riegel and Travis Willingham, via Variety.

Titmouse president (the animation company for The Legend of Vox Machina) Chris Prynoski added that he was “overjoyed for Titmouse to join the Critical Role adventuring party to slay this beast alongside the mighty Amazon army!”

What is certain, is that the series was easily popular enough to merit a second season. The critical reception to The Legend of Vox Machina has been generally positive, with the majority of stellar reviews coming directly from fans of the series.

The Legend of Vox Machina season 1 scored an impressive 8.4/10 on IMDB, 8.6/10 on RatinGraph, and an average audience rating of 93% on Rotten Tomatoes.

“I’ve always felt D&D would make great watching but until now haven’t seen anything that captures the magic of role play. This show is the best version of that available and it’s definitely less dungeoning and dragoning it captures the complexity of storytelling and character well. I actually think the episodes are too short.” – User review, via IMDB.

Alongside confirmation of the January 2023 release for season 2, it was also revealed that a third season was now in development.

“We can’t wait to bring you #TheLegendOfVoxMachina Season Two in January 2023. BUT – it will take more than just two seasons to tell the story of these legends… WE’RE OFFICIALLY GREENLIT FOR SEASON 3!” – Critical Role, via Twitter.

Again, this is not necessarily a surprise to avid fans as the first 10 episodes were funded through an incredibly successful Kickstarter campaign in 2019 before Amazon Prime Studios came on board to order two 12-episode television seasons of the animated show.

However, the series may not be just a three-broadcast story, with the view that there is potentially an unlimited number of directions that the series could take when it comes to future seasons because each is based on the Critical Role campaigns.

A targeted release window was sadly not shared for season 3, but the series is currently operating on a one-year production cycle.

In other news, Does Tommy die in The Last Of Us? Fate of Joel’s brother explained

This article originally appeared on https://www.hitc.com/en-gb/2023/01/19/the-legend-of-vox-machina-season-2-confirmed-by-amazon-and-critical-role/