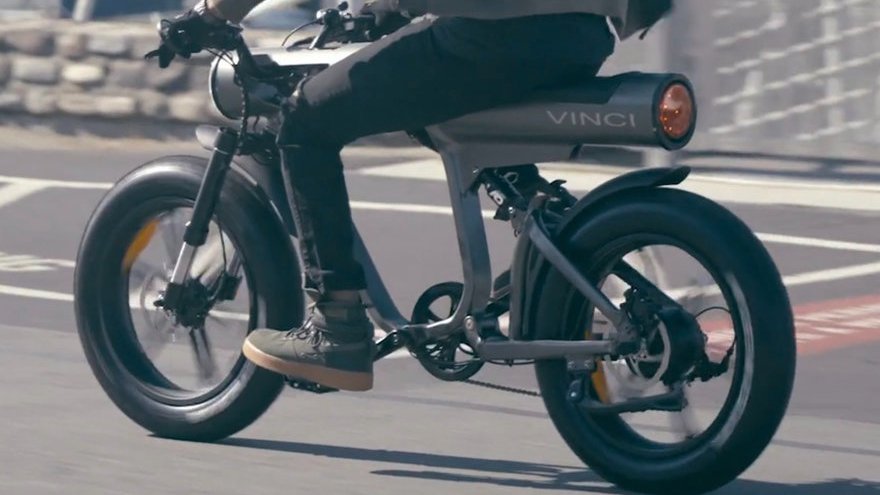 In the Venn diagram of e-bikes that model themselves as a regular bicycle or a traditional motorbike, the Vinci doesn’t seem to fit anywhere. With a name undoubtedly inspired by the “Leonardo da” variety, the Vinci e-bike delivers on the promise of its creator to be unlike anything we have seen before.

From the mind of mechanical engineer and industrial designer Enzo Prathamesh, the Vinci e-bike is as functional as it is stylish, aiming to stand out from the crowd with its unique design.

“Since I was a kid, I have been obsessed with cars and bikes, and sketching them. This is my favourite bike that I have been planning for a very long time.  Now I studied mechanical engineering, and now, I finally made my own favourite bike.”

The e-bike boasts an aluminium-alloy top frame tube which houses both an LED headlight and brake light along with a 48v, 15Ah lithium battery. The battery, which is mounted under a prominent seat, powers a 750w rear hub-mounted motor which offers 30 miles (48.3 km) of throttle-only riding, or up to 50 miles (80.5 km) of pedal assist.

A colour LCD in the tube gives speed and battery info, with up to 25 MPH (40 KMPH) available in Eco Mode, and 35 MPH (56.3 KMPH) in Sport Mode. The Vinci includes a seven-speed drivetrain Shimano gearset, front and rear suspension, with fat Kenda tyres, adding up to a mere total of 70 lbs (32 kg) in weight.

The Vinci e-bike has already drawn comparisons to Amsterdam-based VanMoof, the most funded e-bike company in the world. Vinci is not quite able to match VanMoof’s impressive 200,000 bikes in circulation and $128 million in funding just yet, but it does come at a substantially lower price point. The new Vinci e-bike will set you back $1,250 (AU$1,713), whereas a VanMoof S3 comes at a substantially higher cost of $2298 (AU$3,149).

You can click below to check out the Kickstarter campaign and cop your own.

This article originally appeared on https://www.bosshunting.com.au/motors/electric/vinci-e-bike/