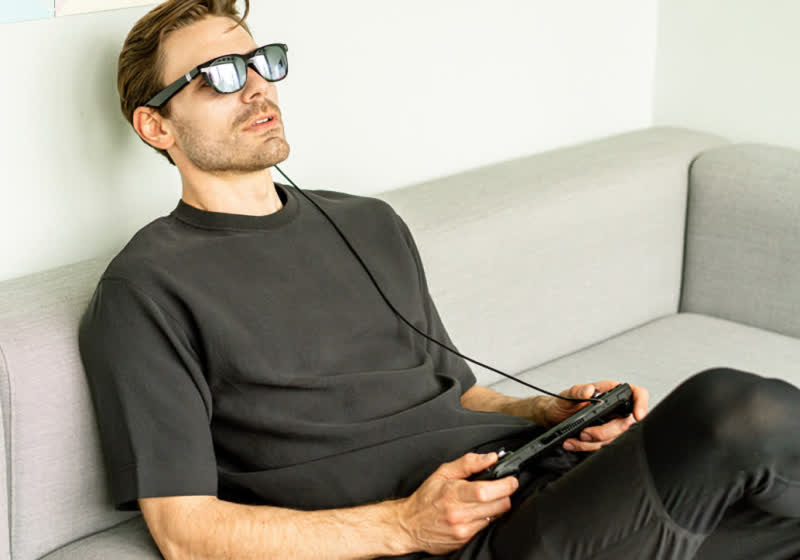 Something to look forward to: Imagine being able to play the best PC/console games and watch movies where ever you are, thanks to a pair of glasses that project a 120-inch screen in front of your vision. That’s the promise being made by the Virtue One XR glasses, and it seems plenty of people are excited by the prospect: the project has raised over $2.5 million on Kickstarter, despite having a target of just $20,000.

The Virtue One XR glasses offer the sort of virtual screen we’ve seen in similar VR/AR devices, but these claim to be a little different. They project a 120-inch, 1080p display (55PPD) running at 60fps in front of the user.

The glasses also claim to enable true portable gaming thanks to an attachable neckband preloaded with streaming apps, such as GeForce Now, and they will be compatible with remote play game streaming services—providing you have a stable 5G or WiFi connection.

The developers note that PC gamers can install Steam Link on the Virtue One glasses to access their entire Steam library on the go, or they can download the Moonlight (Nvidia) or AMD Link apps to access their PC games on the device.

Virtue One can be bought without the neckband while still being compatible with any USB-C devices with video output and power delivery, including the Steam Deck, select Android phones, and compatible laptops. There’s also a mobile dock option for directly attaching the Nintendo Switch and HDMI devices (PCs, TV sticks, consoles, etc.).

The glasses weigh 77 grams—the neckband is 170 grams—and they certainly looker cooler than similar rivals, though you’ll probably stand out wearing the neckband in public. They also boasts an embedded directional speaker, control pad, color-changing film to dim or brighten content, and a prescription lens options so near-sighted users don’t have to wear glasses or contacts.

The Virtue One glasses alone cost $429, or $479 once the early bird offer runs out. Buying them with a neckband costs $529, as does the package that includes the dock; both are $579 once the Early Bird deals are all snapped up. Alternatively, all three items together cost $629 or $679, depending on what’s left.

Reviews of the Virtue One prototype glasses have been positive, and raising $2.5 million when your target is $20,000 speaks volumes about how much faith people have in the project; it’s more than what the original Oculus Rift raised on Kickstarter. Hopefully, they will live up to the hype. We’ll find out when the final models ship, which is estimated to be October or November this year.

This article originally appeared on https://www.techspot.com/news/94619-immersive-xr-gaming-glasses-have-raised-25-million.html