Throwing It Back To Some Classic Builds 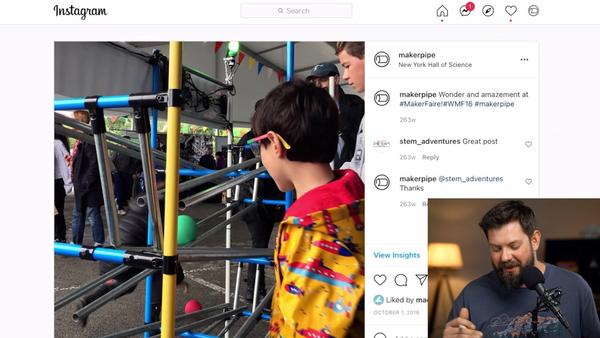 Every week we take a look at builds that have been submitted by makers in the community through social media, email, reviews on the website, and the Maker Pipe Connect community page. We feature these in the aptly named Maker Pipe Monday series on YouTube. This week, we’re looking to the past and showing off builds from our Kickstarter days. Let’s get into it!

When creating our Kickstarter video a few years ago, we had about 48 prototype T Connectors, and that’s it.  That left us building things, taking them apart, and building new things. We wanted to build things that showed how Maker Pipe could solve common creative problems. Thus, this bike cart  was born. This homebrewing cart was made by John Carter, Dave’s brother-in-law, who loves making homemade beer. He wanted to make a more sophisticated setup, so he and Dave worked together to create this awesome cart. The frame was of course made with EMT and T Connectors, and 3 giant steel kettles were added as well as the burners below them and an electric pump to move liquid from one kettle to the next. It was plenty of fun to create and was well worth the cheers at its completion. Meg, John’s wife, also made an appearance in the Kickstarter video. She’s a wonderful artist and has a technique for painting glass, which we built a camera cage to film and show. The frame was constructed with the same materials as the other builds, and had a whopping 6 GoPros on it! There were 7 cameras in total, if you count the… The setup to film Meg’s painting also included this electric sliding camera, which was powered by a stepper motor made with Arduino. The base was made with MPCNC parts that were adapted for this build. Overall, it worked pretty well with the exception of the skate bearings that we used as rollers, which made the setup less smooth than it could’ve been. Meg also plays cannonball run in the Kickstarter video, a game we made for the video and brought with us to Maker Faires all over the country. Each person drops their “cannonball” down the ramps, and the ball that reaches the bottom first hits a button and turns on a light to display their victory! Young and older makers alike enjoyed this game, including @andystechgarage, a great educational page for young makers. It was great to see everyone having fun as their balls raced down the ramps.

It’s hard to believe all of these builds were from 5 years ago! It’s a good thing to look to and learn from the past every once in a while, and it only makes us more excited for the future. Speaking of the future, preorders are up for the Pro T Connector, a T Connector that fits 1″ conduit, and the first product in the Pro series. There are no doubt many more amazing builds to be created and shared, so we hope you stick around and discover them with us.

If you’d like to submit a build of your own or ask a question, you can do so through email at [email protected], social media with #makerpipe, and of course, the Maker Pipe Connect community page. The video version of this blog will be listed below. Thanks and happy building!

This article originally appeared on https://makerpipe.com/blogs/diy-modular-pipe/throwing-it-back-to-some-classic-builds-mpm-069