Tripwire Talks To Austin Hough About The Masters Comic Series 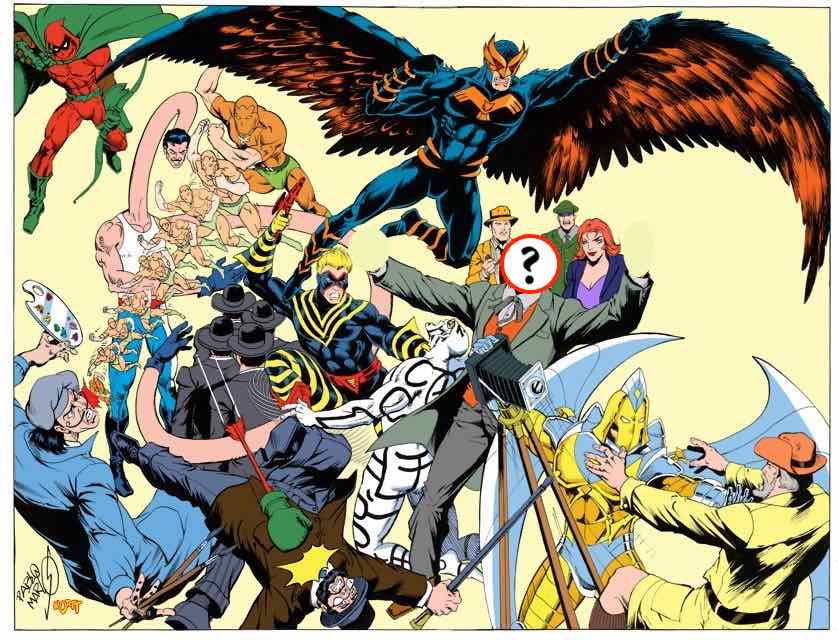 It’s every fanboy’s dream, isn’t it: enlisting some of the greatest creators of the comic book industry to breathe real life into your four-color dreams. Well, Tripwire’s contributing editor Scott Braden introduces you one of today’s most interesting citizens of comicdom: Austin Hough, his Power Comics, Inc., and The Masters.

Dig his story if you will…

What is your comic book background?

A: I am simply a 52 year-old husband, father of three, fanboy who longed for the style of comic books from his youth. I miss them terribly and I do not think I am alone. For me, the Bronze Age of Comics was truly it’s Golden Age.

What is the secret origin of The Masters? What led you to take on this great undertaking?

A: I have been making custom DC and Marvel action figures in the Mego-style for over 20 years (here is my Facebook page: https://www.facebook.com/megowgshcustoms) and had an idea for an original Batman villain, about 15 years ago or so.

He was inspired by famous 20th century surrealist painter Salvador Dali and I named him Sir Real Ordeal. He possessed magic paint which when used turns whatever subject matter he paints alive! Paint a picture of a landscape on a wall and you could actually jump into the picture. Paint a picture of a lion and the lion comes to life. And, so on and so forth. The only limits are his imagination (and he, of course, painted in the surrealistic style of Dali, too. So pretty much anything goes.)

I never made the figure and forgot about the character soon thereafter. Until 2019 that is.

Something triggered my memory of him and I set out to make him. But, I didn’t want to stop there. I now wanted to make a whole team of super villains inspired by my favorite artists. So I picked Ansel Adams, Keith Haring, Toulous Lautrec, and Rene Magritte as inspiration and created Panorama, Graffiti, Monsieur Petit Renard, and The Clerk, respectively. All with powers that are related to their art. I dubbed this super villain team: The Masters!

What made you decide to gather some of comicdom’s greatest artists to bring your dream to life?

A: I was encouraged by my friend Michael Finn to simply approach these artists to see if they would be willing to contribute a cover or two for the project and find equally talented but lesser- known artists to work on the interior pages. This way I would have the Big Bang of the famous cover artist with the less expensive interior artist doing the majority of the work. It was a completely cost-savings idea. Well, after I pitched my first artist for a cover, my entire game-plan changed.

Who of the artists did you approach first? Can you remember how it went down?

I originally approached Joe Rubinstein and told him about my project and how I wanted him to ink some covers for me. Joe and I had become friendly a couple years prior through some cons and I knew I wanted him on this project. For my money Rubinstein is on the Mount Rushmore of greatest living inkers. I asked him if he could help put me in contact with some of the artists I was looking to hire. He said no problem and emailed them all right away.

The first to reach out was Alan Weiss. We spoke on the phone for three hours at the end of which he was so excited about the story he asked if he could not only draw a cover, but also an interior chapter and help with redesigning some of my public domain characters. I thought two things: first, “Who am I to say ‘no’ to Alan Weiss” and second, “This is the formula I’m going to use to attract my other favorite artists to join the project.”

Each artist will get to draw a cover; choose their favorite villain and draw their interior chapter; AND they will have complete creative freedom to reimagine the Golden Age public domain superhero they fight in that chapter. And, off to the races I went!

Why these heroes and villains? What led you to choose each of them?

The villains are all my original creations inspired by some of my favorite artists and their art.

The heroes are all Golden Age public domain super heroes selected as replacements for the DC heroes I originally selected for the story.

You see originally, at the urging of my friend DC artist Art Baltazar, I was going to pitch the story to DC Comics and it was going to feature Batman in a Brave and the Bold tribute story where he would team up with another hero to fight each villain. With the uncertainty surrounding DC I decided it best to replace all of the DC heroes I had chosen (Batman, Green Arrow, Hawkman, Elongated Man, Atom, and Red Tornado) with public domain heroes of a similar vein (Black Owl, Arrow, Airman, Plymo the Rubber Man, Fly-Man, and Twister), self-publish under the name Power Comics, and launch a Kickstarter.

Who redesigned the public domain heroes and gave them their new dynamic looks?

What made you offer these creative add-ons to the Kickstarter – for example Halloween masks, action figures, and treasury editions? Brilliant!

Thank you for your kind words.

Remember, I am a toy maker first! So I thought besides the Bronze Age feel of the Brave and the Bold inspired Masters, what else could I offer for Kickstarter rewards? And, I thought, why not offer everything else that oozes Bronze Age goodness? Puzzles, and action figures, and Halloween masks, and coloring books, and Slurpee cups, and lunch boxes, and so on and so forth.

What is your endgame with The Masters? One-off project or continuing series?

All of the artists who have reimagined our public domain superheroes have expressed interest in continuing with them on their own individual titles. We also have the option of starting a superhero group series called The Power Corps named after the superhero group we’ve put together.

Other artists on our team have also expressed interest in continuing to work with Power Comics in varying capacities including offering their own stories or creator-owned characters.

And, we have been flooded by submissions from other artists and writers who want to work with Power Comics as well.

Support the kickstarter for The Masters here

This article originally appeared on https://tripwiremagazine.co.uk/headlines/tripwire-talks-to-austin-hough-about-the-masters-comic-series-and-kickstarter/